Bhutan Land of Happiness Tours > Bhutan at a Glance

Bhutan at a Glance

Bhutan is a small Buddhist country located in the eastern Himalayas surrounded by Tibet to the north and India to the east, west and south. Increasingly renowned as one of the Earth’s last precious unspoiled spots this magical place with a vibrant Buddhist culture is integrated into every aspect of daily life. Spectacular mountain scenery provides a backdrop to pristine forests and picturesque valleys. The breathtaking landscape is dotted with fluttering prayer flags, colorful farmhouses amidst the terraced fields, and impressive monasteries clinging to impossible cliffs. 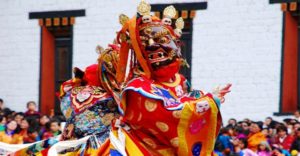 The inhabitants themselves call this “Druk Yul”, the land of the peaceful dragon. The Kingdom’s low population and its wise and farsighted leadership have propelled Bhutan into the 21st Century with much of its natural and cultural heritage unique and intact.

Hydro power : The country has immense hydro power potential estimated at 30,000 MW. Presently only about 1500MW has been tapped most of which is exported to India generating huge revenue for the country.

Ethnic Groups: While there are several language groups and communities, the country is composed of two broad ethnic groups. The Drukpas, who are Mongoloid and of the Buddhist faith, make up 80 per cent of the population; people of ethnic Nepalese origin, who are mainly Indo-Aryan and of Hindu faith, make up 20 percent.

Language: Bhutan’s official language is Dzongkha and Choekey (classical Dzongkha) is used in traditional and monastic schools. However, English is the medium of instruction in all secular schools in Bhutan and it is widely spoken. Therefore for an English speaking tourist it is easy to communicate with the locals.