Season’s in Bhutan.
Bhutan has four seasons in a year; although, it is possible to visit Bhutan throughout the year, the best seasons to visit Bhutan are in spring and autumn. During these months of the year, Bhutan has not only favorable and pleasant climatic conditions but also has lot of on-going festivals and events within the country.

Spring and autumn are also considered peak tourist season and unless the tour reservation is made two months before the departure date to Bhutan, it is very difficult to arrange in short notice due to limited seat capacity in Druk- Air being the only airline to operate in and out of Bhutan.

Climate
The central part of Bhutan enjoys a semi tropical climate with warm summers and mild winters, while Thimphu, Paro, Tongsa and Bumthang have pleasant summers and very cold winters.  The east of Bhutan is generally a little warmer than the west of the country. The southern low-altitude belt is tropical, with hot summers and pleasant 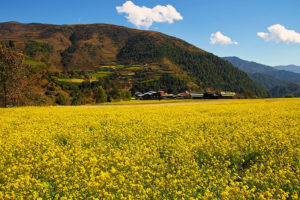 Clothing
Traveling in the mountains means that you can experience a wide range of temperatures in any one day. During the day it can be quite warm whereas night-time temperatures can drop drastically. Crossing over a pass requires an extra layer of clothing just for an hour or two. It is better to plan to layer your clothing rather than bringing too many bulky warm clothes. Long sleeves are advisable since the sun is very strong and, similarly, a hat is recommended. A small face mask is suggested on long drives since the roads can get quite dusty, depending on the season.

As for a dress code, you should be aware that Bhutanese are conservative in their dress and do get offended by the sight of tourists wearing skimpy or tight-fitting clothes. Shorts and vests are not advisable during visits to monasteries, dzongs and other religious institutions. Hats and sunglasses must be removed before entering the above-mentioned places.

Food
Bhutanese cuisine is a mix of many cuisines but particularly, Ama datchi, chili with cheese is preferred by Bhutanese as one dish in every meal. You may choose your order cautiously and ask to minimize use of chili although most of the tourist standard hotels serves food as desired by the guests. A large variety of cuisines of world class standards are available in Bhutan.  You may give your preferences beforehand for arrangements. 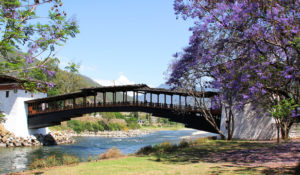 Drinks/Cigarettes
Wide varieties of Bhutanese drinks are available in Bhutan. The most preferred ones by tourist are Special Courier (Whiskey), Coronation Rum, K5 Whiskey and many more. You are allowed to bring in 200 milliliters of imported drinks after declaring in the airport for self consumption or to gift someone.

Sale of cigarettes is banned throughout the county. However, you may declare and bring 200 pieces for self consumption with payment of 100 % custom duty and 100% sales tax. Also, smoking is prohibited in public places even if you have a valid payment receipts. Always carry the receipts as you may be asked to produce any time for verification. For Indian make cigarettes, you have to pay 100% custom duty only while entering by road via Indian border towns.

Internet
Internet is easily accessible in most parts of Bhutan with cafes everywhere, especially in urban town areas.  The rates are very reasonable. International telephone and fax services are excellent and available in all the towns. 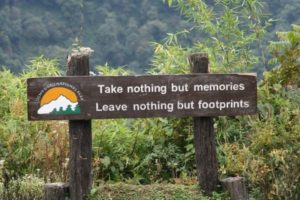 Money
The local currency of Bhutan is Ngultrum (Nu.), with 1 Ngultrum = 100 Chetrums. It has the same value as the Indian rupee. Tourists are advised to carry travelers’ cheques (preferably American Express) and a small amount of cash (US Dollars). Some of the hotels and many stores in Thimphu accept Visa, MasterCard and American Express cards. There are ATM’s in most of the urban towns in Bhutan. The exchange rate is, 1 USD $ is equivalent to about Nu. 45/- approximately.