Three factors have exerted great influence on the course of Bhutan’s development. The first being continuous culture. As Bhutan was never conquered or colonized, the country developed a culture relatively fee from outside influence, the institution of monarchy, and deep sense of nationhood. The second factor is the environment, which is protected by mountains, often difficult terrain. Thirdly, Vajrayana Buddhism has given the country a view of the world on which the Third and Forth Kings based their policies of developing Bhutan’s potential in every field. This continuing development of Bhutan has been crystallized in a philosophy crafted by the Fourth King of Bhutan, His 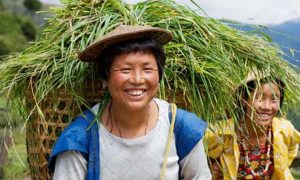 The country believes that for a holistic development of the individual and society, it is essential that development 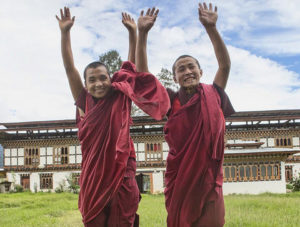 achieves a sustainable balance between the economic, social, emotional, spiritual and cultural needs of the people. This has led to the declared objective of viewing development as a continuous process towards maintaining balance between the material and the intangible needs of individuals and society. The concept reminds the country that the means must always be considered in terms of the end and, therefore, every step in material development and change must be measured and evaluated to ensure that it will lead to happiness, not just more development.

Having accepted that the maximum of Gross National Happiness (GNH) is philosophy and objective of the country’s development, it was felt necessary to more clearly identify the main areas, and create the condition to enable the people to attain greater happiness. Recognizing that a wide range of factors contribute to human well-being and happiness and that it may not be possible to exhaustively define or list everything for the purpose of its development planning, Bhutan has identified four major areas as the main pillars of GNH. These are economic growth and development, preservation and promotion of cultural heritage, preservation and sustainable use of the environment, and good governance.

Guided by the ideas of Gross National Happiness (GNH), Bhutan has been making steady progress in every sector toward the goal of modernization. Hydroelectric power, economically the most significant sector for Bhutan’s goal of self-sustaining development, has grown impressively. The education, social services and health sectors have made great strides forward and continue to be the most important social components of the country’s fiscal situation has been made in the development of human resources and the legal infrastructure.