Location
Bhutan is a landlocked country about 300km long and 150km wide, encompassing 38,394 sq km. The high Himalayas to the north separate the kingdom from the Tibetan Autonomous Region of China, while the rugged eastern region borders the Indian states of Arunachal Pradesh, Assam, West Bengal and Sikkim. 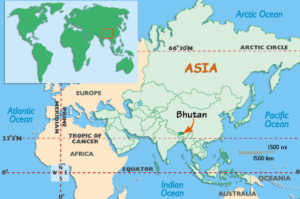 Climate
The country can be divided into three distinct climate zones corresponding broadly to the three
geographical divisions. The southern belt has a hot, humid climate while central Bhutan has a cool temperate climate. The northern region has severe alpine climate and is perpetually under snow.Rainfall can differ within relatively short distances due to rain shadow effects.