The People
Bhutan is a rich mosaic of cultures, lifestyles, languages and belief systems. In a country with a population of just over half a million, as many as 19 different dialects and a few languages are spoken. This is attributed to the fact that in the past, Bhutanese communities settled in the valleys with limited communication. It is for the same reason that the sense of individuality and independence emerges as a strong characteristic of the people.

The Bhutanese are, by nature, physically strong and fiercely independent with an open and ready sense of humor. Hospitality is an in-built social value in Bhutan. People wear colorful dresses, the men wear a Gho, a long robe tied around the waist by a slim fabric belt, or Kera. Kira, the main garment of women is an ankle length wrap-around dress secured by a belt around the waist, and fastened at the shoulders with silver brooches called Korma.

There is no rigid class system in Bhutan and social and educational opportunities are not affected by rank or birth. Bhutanese women enjoy equal rights and opportunities as with men. Both men and women are free to choose their partners for marriage and both can initiate a divorce. 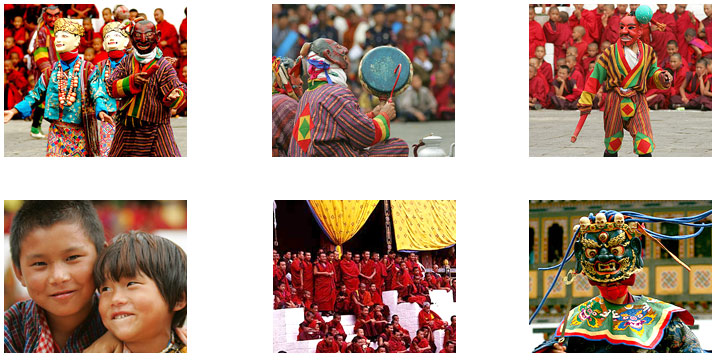 Monks are held in great respect and play an important part in community life. Representatives of the monk body are present at all important occasions. In the past, it was common for one son from each family to enter the monastic order, a custom that is less prevalent today.

Culture
Unlike many countries, traditional arts, age-old ceremonies, festivals, social conduct and structures are not remnants of a bygone age. Traditional arts and crafts are still practiced as they were done hundreds of years ago. Vibrant festivals are celebrated and social principles like the Driglam Namzha (age old etiquette and code of conduct) are still evident because they continue to have a special significance in the daily lives of the people.

Bhutanese language and literature, arts and crafts, drama, music, ceremonies and events, architecture, and basic social and cultural values draw their essence from Buddhism. Just as the Kingdom’s history is characterized by religious landmarks, the influence of religion is highly visible in everyday life. Hundreds of sacred monasteries, stupas, religious institutions, prayer flags and prayer wheels mark the countryside, providing a strong infrastructure and atmosphere for the teachings of their living faith.

Bhutan’s traditional culture is alive in its performing arts, such as dance and music, which are an integral part of religious ceremonies. In addition, secular performances such as dance, songs, traditional instrumental music, drama based on biographies of religious personalities hold a special place in the lives of the people as they play an important role in national, village, or domestic functions and festivals. Bhutan’s textile tradition has, in recent years, gone international. The distinct technique, colour and style of indigenous Bhutanese weaving is being increasingly appreciated by textile specialists, collectors and users.